According to a family history written by his niece, 19-year-old James Anderson Robbins met his future wife Minerva Elizabeth Hamilton at a Methodist camp meeting in Decatur County, Indiana.  Camp meetings, which were as much social as religious gatherings, were attended by hundreds of people from all around.  Both the Robbins and Hamilton families were prominent in the county so it may be that James and Minerva were aware of each other before the recording meeting, but Kate (Sharp) Jones wrote down what Minerva told her in later years:

He was riding around on a big grey horse with a watermelon under his arm. Riding up to a table set underneath the sycamore trees he laid the melon on it and proceeded to carve it. ‘Now all you girls,’ he said, ‘range yourselves around this table and you will get a slice of the best watermelon raised this year in Decatur Co. I know because I raised it myself. And remember the prettiest girl gets the biggest slice of melon.’ I knew I wasn’t the prettiest girl there, but I did get the biggest slice of that melon. From that day on I saw Jim Robbins most every Sunday afternoon.

Minerva and James Robbins, with daughter

The two were married in 1845 in Decatur County and before leaving for Oregon in the fall of 1851 they were the parents of three children, Sarah Catherine (“Cassie”), Nancy Jane, and Alfred Newland Robbins, though Alfred died in infancy before the family left Indiana.  Interestingly a grandson of James was named Alfred Newlin Robbins so it’s possible that the middle name of “Newland” for the first Alfred has been passed down incorrectly in the family.  Minerva’s brother John Henry Hamilton was married to James’ sister Mary Jane Robbins in 1848.  Both Minerva and John were children of James and Judy (Owen) Hamilton of Decatur County.

One of the few mentions of Indians during the family’s Oregon Trail trip involved daughter Nancy Jane.  A Wasco County, Oregon, historian later told this story about the event:

Mrs. Murray [Nancy Jane Robbins] remembers, too, that there were many Indians always about and that one of the natives was determined to buy her.  He offered her father [James Robbins] six ponies for her and followed the train of emigrants for a half day pressing the purchase.  Finally her father seized a long whip and whipped the Indian so severely that he went away.  Her grandfather, an old gray haired man [Nathaniel Robbins], came and said to her father: “Why did you do that? Now they will come tonight and massacre us all.”  The Indians did come that night in war trappings, but the party was able to pacify them with gifts from their supplies, so that no trouble was experienced.

Kate (Sharp) Jones also told the story that when the Robbinses were trying to ford the South Platte River, in today’s Nebraska, James and his brother William along with father Nathaniel, scouted for a safe place to cross.  The river was not deep but the river bottom hid quicksand that could easily trap a wagon.  The cattle had to be whipped and goaded to cross and James’ team tried to turn around in mid-stream but he was finally able to get them across.

James and Minerva and their two children survived the journey, unlike several of his siblings and other relatives.  The little family settled on a donation land claim in western Clackamas County in 1853, their land, nearly 328 acres, laying on the south side of today’s Homesteader Road and east of Stafford Road.  There they lived almost up to 1870 and where several more children were born:  Judith Amanda, Ellen, Nathaniel James (“Bud”), and Minerva Elizabeth (“Minnie”).

By 1870 the family was living further west in Yamhill County, but they didn’t stay there long because by 1872 they were already well established in The Dalles, the county seat of Wasco County, in north-central Oregon along the Columbia River.  Why did they move from the verdant green of the Willamette Valley to the hot arid country of Wasco County?  It’s not for the reasons that other family members moved east, hopes of better land, the chance to ranch or to mine for gold.  This family lived in town, where James is first listed in a county payment warrant from January of 1872 where he was paid $2 for jury service.

A mixture of sources (family, county, and newspaper) indicate that James Robbins was elected as a Democrat to the office of county coroner in 1876 and 1880 and he reportedly established and ran the hospital in The Dalles.  Wasco County warrant books list a wide variety of expenses for which James was paid, including:  jury service, physician services, providing extra clothing to a pauper, serving as “judge of elections,” various “hospital purposes,” witness at a coroner’s inquest, and in 1874 he was paid $6 for digging a grave.

As coroner, James Robbins had some interesting duties.  The local newspaper reported in February of 1884 that “Coroner Robbins received a postal yesterday from Hood River, dated the 21st.  An Indian found a dead man hanging to a tree about 3 miles from that place.  The coroner thinks the body is that of Henry Hoek, who has been missing for some time.”  There was no report as to cause of death.

Despite being a physician, James found that he couldn’t keep his close family members from dying of disease, much as his father, a country physician, couldn’t on the Oregon Trail.  In 1873, James and Minerva’s 16-year-old daughter Ellen died of “congestive fever.”  The local newspaper reported that she was “a very intelligent young lady and beloved by all who knew her.” 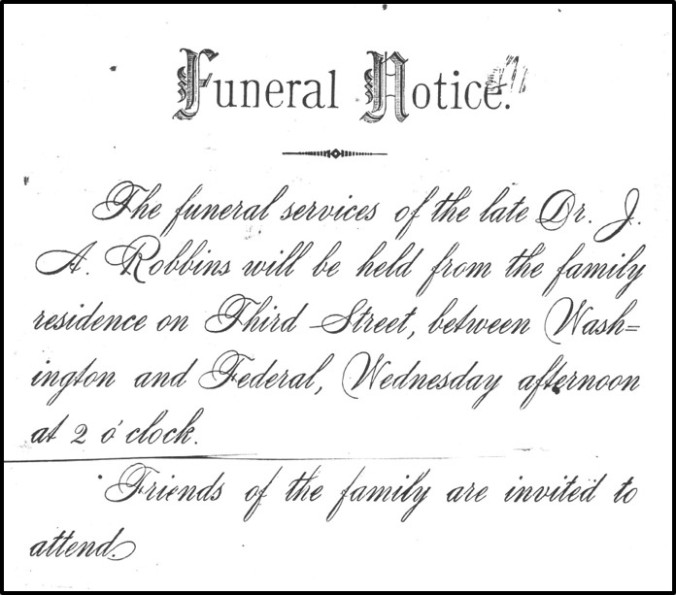 Dr. James Anderson Robbins died on Monday, 15 November 1886, at his home in The Dalles.  He had apparently been in poor health for a couple of years.  He was 60-years-old and the funeral was held at the family home two days later.  Sadly, while it is believed James was buried in the Pioneer Cemetery in The Dalles, no marker or other records survive which corroborates that.

Minerva Robbins continued to live in The Dalles, where in the 1897 city directory she was listed as a widow and milliner, and then later went to live with her daughter Minnie (Robbins) Whitby in La Grande, in northeastern Oregon.  She would frequently visit other family members in the Willamette Valley where they would all reminisce about their previous life in Decatur County, Indiana, and their trek across the Oregon Trail in 1852.  At such gatherings niece Kate (Sharp) Jones recorded the stories.  Minerva outlived her husband by many years, passing away in 1920 at the age of 97.  She too is said to be buried, unmarked, in The Dalles Pioneer Cemetery.

One thought on “James Anderson Robbins: Doctor and Coroner”