In honor of Independence Day this post is about William Robbins, the only child of Jacob and Mary Robbins to serve in the military during the American Revolution.  Whether you are a direct descendant of William or a descendant of one of his younger siblings, his service in the North Carolina militia should be remembered.

One of the very best books on the American Revolution in the South is The Revolutionary War in the Southern Backcountry by James Swisher who describes not only the well-known battles (Cowpens, Kings Mountain, etc.) but how the war deteriorated into a vicious civil war.  The war in the south was very different than that in the north.  After lack of success in the North, the British turned their attention to the southern colonies.  In the south the population was more widely dispersed, roads and transportation were more primitive, and there were frequently competing patriot and Tory militias operating in the same location, raiding, burning, arresting, and hanging their neighbors left and right.

In this chaos young William Robbins, just turned 16 years of age, enlisted in the North Carolina militia in October of 1777.  William’s military service, by his own account, wasn’t heroic (“He was in several skirmishes with the Tories but was in no real Battles…”).  In his pension application which he submitted in 1833, he concisely describes his marching to and fro from one location to another in what is now the Randolph county area.  (Randolph County was created in 1779 from Guilford, which was created in 1771 from Rowan and Orange counties – so the actual “location” of William’s birth in 1761, usually recorded as Randolph county was really Rowan or Orange).

William enlisted three times during the revolution.  The first enlistment was for one months service.  The second, in September 1778 lasted a year, and then finally he was back in the service in August of 1781 until the following February.

In this area of North Carolina a Tory partisan leader, Col. David Fanning, who led raids against the colonists, operating out of the Raft Swamps on Deep River.  Most of William’s military service was spent in pursuit of this man or on guard duty.  Fanning was pretty wily – among his exploits was capturing the patriot governor of North Carolina, fighting 30 skirmishes, and reportedly was captured and either escaped or pardoned 14 times.

Among the actions William mentioned in his pension application, he marched from the “Cross Roads” in Randolph County through what “…was called the Scotch Settlements” in pursuit of the “noted Tory Fannen,” down Deep River, then over to Salisbury then to the Yadkin River then to Island Ford on Deep River, and then into Guilford County, and then home.  Reading the account could make one’s feet hurt but in actuality the distances were not great.  Were some of the skirmishes he mentioned with the infamous Fanning?

Despite Washington’s victory over Cornwallis at Yorktown in the fall of 1781, the patriots weren’t taking any chances.  In February of 1782 William was discharged “…with strict orders to be ready at a moments warning when he should again be wanted.”  Thankfully the war was soon officially over and William didn’t need to serve again.  According to his wife Bethiah’s pension application “…he had made all preparations to go into the service under such engagement and had his clothes nearly completed when the news came that Lord Cornwallis had surrendered and that he would not be forced to leave home.”

William Robbins declaration for a pension (1833)

William Robbins had married Bethiah Vickrey in 1779, when he was 17 years old, only a year and a half after his first enlistment.  The couple, with other members of the Robbins family, left North Carolina after the war and moved north to Virginia, where they lived in Franklin County, before moving on to Shelby and Henry counties, Kentucky, about 1800, and finally Decatur county, Indiana, by the 1820s.

When it became possible to receive a pension for Revolutionary War service, William applied in 1833.  Unfortunately he died within the next year.  Bethiah then took up the cause for a widow’s pension, which was granted in 1842, in the amount of $20 per year.  In her application she submitted a statement from William’s next youngest brother Absalom in which Absalom stated he was “more or less in the Company of his said brother William during the Revolutionary War” and that he expected to be drafted when he turned 16, which he did the autumn Cornwallis surrendered.  Unlike William’s statement, Absalom claims that both William and their father Jacob were in the battle of Guilford Courthouse.  That cannot be confirmed, but we can be left with the knowledge that William Robbins, a teenager, served in the American Revolution, and his parents and younger siblings were deeply affected by the chaos of a civil war going on around them. That they survived and thrived is a testament to the strength of our early American ancestors. 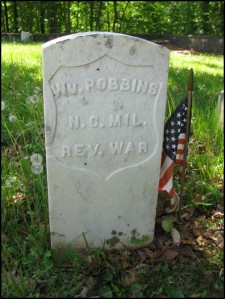