John Dow Robbins was the second eldest son of Nathaniel and Nancy Robbins.  He was born in Bond County, Illinois (see previous post) in 1819 and never married.  He was about 32 years of age when he accompanied his parents, siblings, and other relatives west to Oregon.

No photo or physical description exists of Dow Robbins.  He was likely bearded like his brothers and probably weathered and muscled from years of working on the family farms. 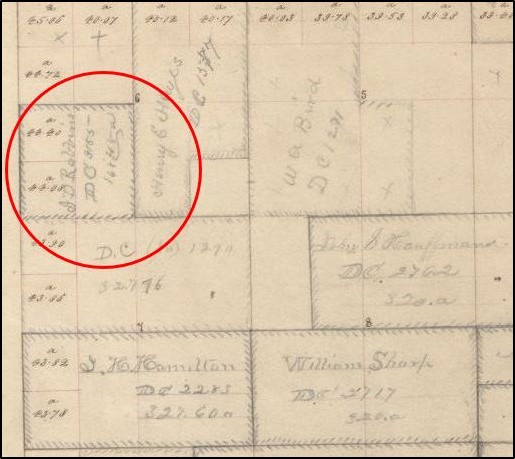 Once he arrived in Oregon, Robbins applied for a Donation Land Claim.  Single individuals who arrived in Oregon after 1850 were entitled to a quarter-section, or 160 acres.  His property was located northeast of today’s Wilsonville, bounded on the west by Stafford Road and on the south by Homesteader Road.  Today much of this beautiful rolling farmland has been turned into estates for the Portland area elite who have built their mini-mansions on our ancestors’ farms.  We don’t know where on this quarter section Robbins’ cabin was, but it was in that cabin that he was found dead on May 2, 1873.

A neighbor and his son (though Dow’s niece Kate Sharp Jones claimed it was her brother Oliver Perry Sharp) discovered Dow’s body lying on his bed, underneath some clothes.  He had been shot between the eyes, the ball lodging in the back of his head.  His own rifle had been used to kill him.  A detailed news article on his death appeared in the Oregon City Enterprise:

A FOUL MURDER – On last Tuesday morning the news reached town that Mr. J. D. Robbins, a bachelor living alone on the Tualatin about four miles from this city, had been murdered.  The brother N. N. Robbins resides about two miles beyond the house of the murdered man, and on last Saturday passed the house, but not seeing anyone about, left his mail matter and went on home.

Mr. Shaw who resides close by, had not seen Mr. Robbins since Friday evening, on Monday, he concluded that all was not right, so he went to the house with his boy and finding the door locked, raised the boy up to the window to see if he was inside.  He could not see anything but the bed clothes were piled up as though somebody was under them, and he saw papers and trunks scattered about the floor.  This created the suspicion that Mr. Robbins was dead and covered up under the bed clothes.

Mr. Shaw immediately sent the boy after Mr. Robbins and when he came they effected an entrance through one of the windows which happened not to be fastened down.  When they got in they soon discovered that a foul murder had been committed.  The deceased was laying in the bed with a ball through his forehead which had entered between his eyes and lodged in the back part of the head.  His rifle had been discharged and the ball extracted from his head shown that it was the same size as the ones used in his own gun.

There is no clue as to the perpetrators of this terrible deed.  Mr. Robbins was a man universally esteemed by all who knew him and there is no doubt but he was murdered by someone who expected to get money which we learn they probably got but very little of it if any.

On Friday evening as Mr. Shaw was going to his house, he met two men going in the direction of Mr. Robbins on foot, and a short distance this side he met another on horseback.  The party on horseback was going in the same direction of the footmen and kept the road but never saw them, and it is supposed they must have gone to the house of Mr. Robbins and stayed there.

He was probably murdered while asleep with his own gun and the murderer then ransacked the premises for money or other valuables, very little of which they could have obtained as we are informed that Mr. Robbins hardly ever kept any money by him.  They then covered him up and locked up the house and taking the keys of both doors with them.

These two men have not been heard of in any direction since they were seen by Mr. Shaw and there is strong suspicion that they perpetrated the terrible deed.

An inquest was held on the body by Justice Bailey and a verdict rendered that the deceased came to his death by a gunshot wound from some unknown hand.

Mr. Robbins was about 53 years of, highly respected and has one brother residing within two miles of his late residence and another somewhere in the state.  His relatives live in Decatur County, Indiana.  We hope that the perpetrators of the terrible deed be discovered and brought to justice.

Over three months later another article appeared in the Oregon City Enterprise regarding the murder.  It seems that two men were arrested for the crime but released when it was discovered that there was no evidence to hold them and that they were apparently wrongly accused.

ARRESTED-Two men named David Wright and Warren were arrested last Saturday on a warrant issued upon the affidavit of John Dougherty, charging them with the murder of J.D. Robbins, who was killed in this county last May.  There is a great deal of feeling in this community to get the person or persons who committed this murder, and no sooner was the fact known that the arrest had been made than our citizens became very much excited, and hoped the right ones had been arrested.  But they became thoroughly disgusted when the examination took place and this man Dougherty had not the least evidence against the men he had arrested, and they were promptly discharged upon motion of the District Attorney.  the same as in the other cases.  This man John Dougherty professes to be a detective and is calculated to deceive the people.  He has shown his hand in this matter, and the general verdict is that he is unfit for the character he assumes, and unworthy of any confidence whatever.  The two first men he knew were innocent and what his object was in having them arrested we cannot tell.  but the supposition is that he was working for the reward and would as soon have hung an innocent man as a guilty.  We are informed that he offered $100.00 to one of the men to swear against the other, but failed to find a tool to help him in his foul work.  John Dougherty is well known in Oregon, and where he is it would not be well for him to attempt to establish a reputation.  The result of all is that the County will be called upon to pay the expenses of this preliminary trail amounting to about $100.00 and three men against whom this Dougherty could not produce the least evidence have been held under arrest for a most foul and bloody murder.  Dougherty had better hire his witnesses next time before he swears out a warrant.

No one ever discovered who killed Dow Robbins, but some of his clothes later turned up in a second-hand store in Portland.

Dow’s brother Norval Robbins was appointed administrator of his estate.  In his final report on the estate, Norval explained: “…the money he borrowed in the early part of his incumbency was to employ detectives and others in the effort to secure the arrest and punishment of the murderers of deceased.  He at one time believed success would crown the effort made, but all such hopes are blasted and the criminals have escaped at least for a time.” 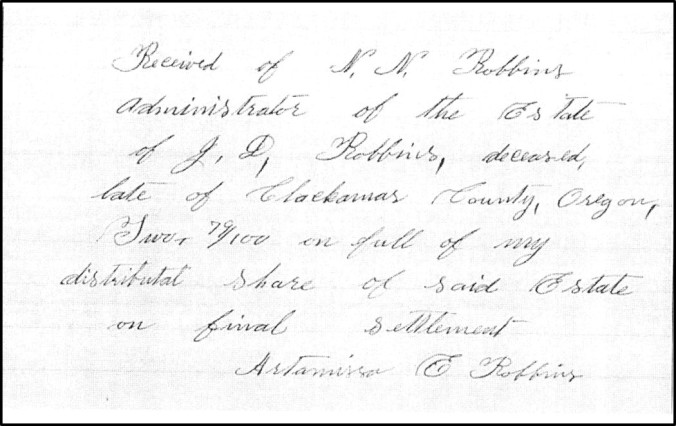 One of many receipts in J. D. Robbins Estate File (Clackamas County, Oregon); in this one my great-grandmother Artamissa Robbins receives her share of the estate: $2.79

On a side note about his estate, the inventory of his property describes the fairly typical rustic Oregon household of a bachelor farmer.  Among his belongings: one wagon, one yoke of oxen, one cow and calf, two steers, stove, grindstone, plow and other farming implements, axes and hatchets, bedstead, chairs and three books.  One wonders what three books he owned.  His heirs were his surviving brothers and sisters, or in cases where they were deceased, his nieces (such as Artamissa above) and nephews.  His death, coming twenty-one years after arriving in Oregon was one more tragedy that this family faced in their new western home.