Enola Snook was a great-granddaughter of John and Ruth (Anderson) Robbins of Decatur County, Indiana.  Her parents William Snook and Emma Elliott were married in Jennings County in 1868, but spent most of their lives Altamont, Illinois, where they were joined by William’s brother John Snook.  Their one sister, Mary Alice Snook, was married to William H. Rybolt and remained in Decatur County.

Enola’s uncle John Snook, a Civil War veteran like his brother, founded a commission business with William, which they engaged in until 1900, when John was named postmaster of Altamont, and later served as alderman and mayor of that town.  John and his wife had no biological children but did “foster” one son, Benson Snook.

Enola Snook was an only child and must have been joyfully welcomed fourteen years into her parent’s marriage.  Before that event her father William had been very busy supporting his wife.  They initially farmed in Jennings County, then moved to Altamont where William engaged in the furniture and hardware business.  By 1874 he was engaged in the grain and stock business, becoming a partner of H. A. Carter in the firm Carter & Snook.  He and Emma appear in the 1880 census in Kansas, where he is listed as a cattle buyer, but they were shortly back in Altamont when Enola came in 1882.  Around that time William Snook joined in partnership with Charles Schumacher and the men dealt in grain and livestock.

Excerpt of William Snook biography in a history of Effingham County, Illinois (1883)

Frank Schumacher, Charles’s son, married Enola Snook in 1908.  Charles continued in the grain dealing business started by his father and father-in-law, engaged in other businesses as well, and the Schumacher couple were quite prominent in the small farming community of Altamont.  In addition to his businesses, Frank served on the city commission, served as a director of the Altamont Building and Loan Association, and served on the board of the Chamber of Commerce.

A 1925 article in the local newspaper recounted how Frank was injured while working on his new creamery.  “The scaffolding on which Mr. Schumacher was standing gave way and he fell to the ground, breaking one rib from the back bone, and splintering another rib.  As a result he will be confined to his home for a week or two.  Mr. Schumacher is owner of the new creamery, which he hopes to have in operation some time in December.”

Enola was also involved in community activities.  She was vice-president of the Altamont Women’s Club, treasurer of St. Elmo Rebekah’s Lodge, was a director, like her husband previously, of the Altamont Building & Loan Association, and attended the First Methodist Church. 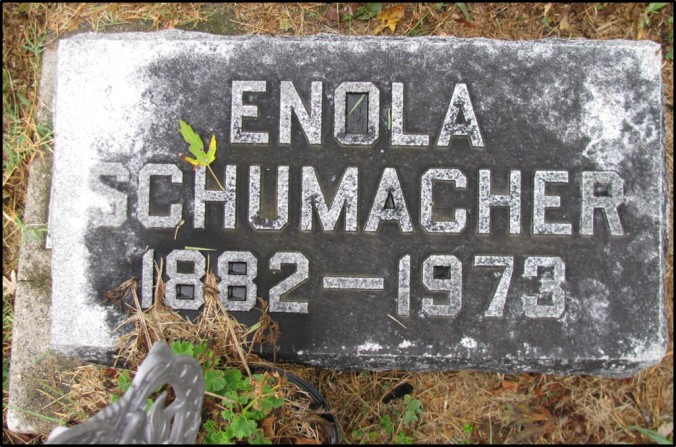 One remarkable thing about Enola (Snook) Schumacher was that she served 30-years as city librarian.  The Altamont City Library opened in 1908 and then closed in 1920 when the materials were given to the public schools.  The library was re-opened in 1937 in a room above the fire station and two years later Enola Schumacher was named city librarian.  In 1948 the library was moved to a new location and Enola remained as city librarian until her retirement in 1969 at the age of 86!  She passed away only four years later and is buried in Altamont’s Union Cemetery with the Snook family.  Of Frank, we do not know what happened to him, when he died, or where he was buried (if in Union Cemetery his grave is unmarked).  The couple had no children and this Schumacher-Snook line ends with Frank and Enola.