William Anderson Robbins and his wife Rebecca Gates had five children, several with very interesting biographies.  The oldest son, Jacob Gates Robbins, never married and passed away at a young age but his passing was noted in Decatur County, Indiana, where he had lived his entire life.

Born in 1845, Gates Robbins, as he was known, engaged in farming with his father.  The family specialized in raising Poland China hogs and were said to have made the family firm “an enviable reputation and decided success.”  Poland China hogs were developed in the United Sates about 1816, being derived from several other breeds.  They are known for their extremely large (as in record-breaking large) size. 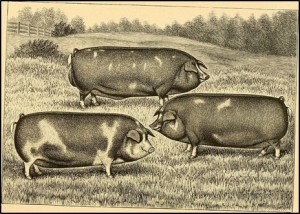 The raising of these hogs must have been very lucrative because William A. Robbins is listed in the 1860 census as having a substantial $8000 value of real estate (up from $1500 in 1850) and $2300 in personal estate.  And by 1870 the real estate value had increased to $15,000.  In each of these census years Gates Robbins was always listed as being a member of the household; he never left home.

At the time of his death, it was reported “Mr. Robbins was a single man in the prime of life.  He was full of energy and business and had acquired a considerable little fortune by his own exertions.  Whether it was business, politics or enjoyment he was engaged in, he engaged in it with all his might.”

The story of Gates’ death was reported in the November 17, 1883, Greensburg, Indiana, Saturday Review, in two stories: a notice of his death and an obituary, both appearing on the same page.  The newspaper reported:

“During the day [Wednesday, November 14] he had been working on the farm and was in apparent good health.  He ate a hearty supper and was sitting by the fire talking to his father.  Suddenly he drew a long breath or two and expired in his father’s arms.”

The Review continued:  “The shock comes to his aged parents and to his brothers and friends as a clap of thunder from a clear sky.  He will be missed and mourned.  He was a good man.  Truly does death love a shining mark.  The funeral services too place yesterday [November 16] and the body was followed to its last resting place by a large concourse of friends.”

It was also reported:  “His sudden taking off can only be accounted for on the usual theory of heart disease or apoplexy.  The Review unites with his other friends in their sorrow and regrets, for he has been its strong friend.”