The last two posts have discussed the first Robbins family to emigrate to Oregon (John and Dosha (Robbins) Herren and their children) and their barely-survivable “shortcut” across Oregon on the Meek Cutoff.  This post will focus more specifically on an incident which occurred during that ill-fated trip: the discovery of gold.

There are several versions of the story.  One of the most complete, though not error-free, accounts was written by Willard Hall Herren, son of William Jackson Herren, the eldest son of John and Dosha.  In 1922 W. H. Herren wrote an article which appeared in The Oregonian (Portland, Ore.).  Here are some excerpts:

Having noticed the several articles in The Oregonian regarding the Blue Bucket mine, some of my friends that know that I could give an account of its discovery have urged me to do so.  Both my father, W. J. Herren, and my mother were members of the company that Steve Meek undertook to pilot from the crossing of Snake river to the Dalles in 1845. 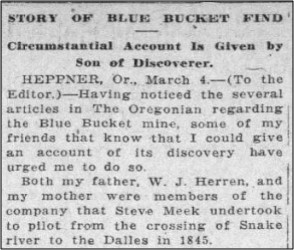 Several of the young men that had saddle horses scouted the country over and finally found a ridge that led to the summit of the mountain.  They concluded that if they could once get their outfits up on to this ridge they could make it over the mountains.  By hitching ten and sometimes 12 yoke of oxen at a time to a wagon they finally succeeded in getting them up onto the divide.  There was no water on the divide so they had to make a dry camp.  The captain of the company told all of the young people who had saddle horses to take buckets and go hunt for water.  My father, who was then 23 years old, and his sister, who afterwards became the wife of William Wallace, took their old blue wooden buckets and started out to find water.  They finally found a dry creek bed which they followed until they found a place where a little water was seeping through the gravel and while my father was digging for water his sister saw something bright and picked it up.

The account given me states that they found two good sized lumps or nuggets, and that there were many fine particles in the gravel.  He was quite sure that it was gold at the time, and when he arrived at camp he showed it to some of the older men, who told him that if it was gold it would be malleable.  So one of them took a hammer and hammered both pieces out flat into a sauce-shaped disc.  He had a tool chest with a secret drawer in it.  He hid the gold in the chest, therefore no one but the members of the family ever knew what became of it.  I well remember the old tool chest and its secret drawer.

It is not known for sure where this incident took place, but many researchers, including the research team gathered for The Meek Cutoff by Brooks Ragan, one of the books I mentioned in the last post, believe it occurred in the Crooked River country, south and slightly east of today’s Prineville Reservoir.

There are other, different, stories that have come down in the family.  One version holds that William J. Herren and his cousin Dan Herren picked up two yellow rocks while out tracking some lost cattle.  Taking the rocks back to camp they showed them only to their family.  They were not sure whether it was gold or not, but to be safe they agreed to keep the find a secret.  John S. Clark, nephew of William J. Herren, later said that the family was more interested in their lost cattle than the nugget.  Clark didn’t believe that the emigrants knew what gold looked like anyway.

Another version has Dan Herren discovering a large nugget of gold by himself in some muddy tracks made by cattle going to water.  Still another story is recounted by Lydia (Wallace) Steckel, daughter of William and Susan (Herren) Wallace.  She told how family members found an old blue water bucket, made of cedar.  Near the bucket Susan Wallace picked up some heavy yellow metal in the bed of a stream.  She reportedly said, “If this is gold, I can fill the old blue bucket!”

Who knows which is the true story, but the consistency of accounts indicate gold, in some condition, was found.  I tend toward the W. H. Herren story, as his is the most complete and he heard it from his father.  He went on to describe later attempts to find the gold:

My people have always hoped that some members of the family would eventually find the place where the gold was discovered, and many years ago my father gave me an old leather-bound memorandum book, with maps and diagrams showing the water courses and giving a general description of the country. I once did some prospecting in the immediate vicinity of where the gold was found.  I found some fine gold, but it was late in the fall and the ground froze so that I had to give it up.  I intended to go back some time and try it over, but have never done so.  Many parties have hunted for the place.  In either 1855 or 1856 one of my uncles in company with four others started for the place, but at that time the Indians were bad, and they got away with the horses and two of the party were killed by the Indians.

A final account describes a search by M. B. Rees, kin to the Herren family, which appeared in the Blue Mountain Eagle (John Day, Ore.), which may explain the find:  “The Rees party followed the route so accurately that even the marks of the trail made by the immigrant wagons were visible.  They came to the camping place where the nugget had been picked up.  Mr. Rees was fairly well acquainted with mining and when the place was reached, he knew that the nugget which had been found was a mere chance discovery and that it had evidently been dropped there by some other agency than that through the working forces of nature.  This journey convinced Mr. Rees that the Blue Bucket Mines were destined to remain through the years as they had in the past – only a myth.”

Though the gold was never found again, the lure of a “lost gold mine” played no small part in the exploration and eventual settlement of eastern Oregon after the western parts of the state were filled with settlers.  Many of our family members went east to search for the gold and ended up mining, farming, or ranching, spreading our family throughout the inland Northwest.