This post is a more in depth look at one aspect of the first Robbins-connected family’s trip to Oregon, as recounted last week, about the Herren family’s trek across eastern Oregon on the Meek Cutoff in 1845.

There have been a number of books written about the Cutoff.  The Terrible Trail: The Meek Cutoff, 1845 by Keith Clark and Lowell Tiller (1966)

and The Brazen Overlanders of 1845

by Donna Wojcik Montgomery (1976), look at the entirety of the 1845 emigration from Missouri to Oregon, and provide listings of every family they have identified as being on the Oregon Trail that year.  Two more recent books take a slightly different approach.  Wood, Water & Grass: Meek Cutoff of 1845 (2014)

by James H. and Theona Hambleton takes a very pro-Stephen Meek position, claiming that the mountain man, by virtue of his frequent fur trapping travels across Oregon, was never lost and knew exactly where he was at all times.  This is a view not held by other researchers, including the group of researchers that came together to study and travel the Cutoff and who’s work is the basis for The Meek Cutoff: Tracing the Oregon Trail’s Lost Wagon Train of 1845 (2013)

by Brooks Geer Ragen.  Anyone interested in the Cutoff is encouraged to find these books for the various perspectives they provide.

John Herren, the husband of Dosha Robbins, apparently kept a journal of the family’s trip west.  The only part that has survived is a portion beginning at Fort Boise on the Snake River on August 23rd and ending on September 8th and the Ragen book quotes the entirety of this journal, and uses it to help track the emigrants route and identifies the Herren family’s nightly camp sites.  This diary excerpt was first published in the Albany (Oregon) Daily Democrat in January of 1891.  In the introduction to that reprint was the following information:

“The following is an extract from a diary kept by Mr Herron, father of W J Herron, of Salem, and of J R Herron, a former Sheriff of Linn county.  The diary was obtained by Jason Wheeler, of this city, from J R Herron and copied.  Mr Herron afterwards lost the original.”  And at the end of the published extract was this note:  “Here the diary was torn and mutilated so that I could not proceed with it any further.”  An additional story is that the original of the journal was lost in a family house fire in 1918. 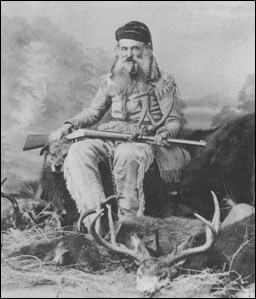 “This morning our company was called together, for the purpose of hiring a pilot to conduct us across the bed Boise River and over the Blue Mountains, down to the Dalles on the Columbia River.  This route will cut off the bend of the road that leads down Burnt River, and is said to be one hundred and fifty (150) miles nearer than the old route.  Price agreed on with Mr. Meek to take us through the new route was fifty dollars, so we got up our oxen and started about 9 o’clock, and travelled a northwest course to a beautiful stream of water called Malheur, about twelve miles from where we crossed the river; found plenty of grass and small willows to build a fire to get supper with, so there was no grumbling.”

In the days following Herren noted the rough road (“the worst road that they [oxen, cattle and horses] had traveled over yet, for it was uncommonly rocky and hilly” and “We had to remove some ten thousand stones before we could pass near the head of this ravine”), the presence of Indians (“the [Indians] stole one horse last night within thirty yards of our encampment”), the lack of food and water for stock (“found no water, only a small spring that did not afford water enough to drink, so our poor oxen, cattle and horses had to suffer for water another night”), and growing disenchantment with their guide and the emigrants decision to leave the main Oregon Trail (“I hope that no other emigrants will ever be gulled as we have been”). 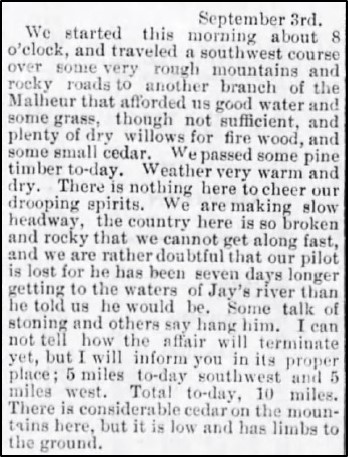 After ten days of traveling west, north, and south through the arid lands of southeastern Oregon John Herren notes some tension in the wagon train.

“There is nothing here to cheer our drooping spirits.  We are making slow headway, the country here is so broken and rocky that we cannot get along fast, and we are rather doubtful that our pilot is lost for he has been seven days longer getting to the waters of Jay’s river than he told us he would be.  Some talk of stoning and others say hang him.  I can not tell how the affair will terminate yet, but I will inform you in its proper place…”

The following day Herren mentioned seeing a mountain which he thought was the Oregon Cascades and that they were on Jay’s River – now called the John Day River – when in fact they were far south on the Silvies River which flows south into the landlocked Malheur Lake.  The emigrants had a long way still to travel, even if they knew the direction to take.

“September 4th. – We started about 8 o’clock and traveled a south course about 4 miles, then turned southwest about 2 miles and passed down a very rocky hill or mountain into the valley of Jay’s river, here we turned a west course about 8 miles to a beautiful little rivulet of water but no wood except small willows.  Grass is very good.  This valley is on the river that we have been looking for the last seven days.  I hope the grumbling will cease now as our course appears to be west and the peak at the mouth of Jay’s river near the Columbia, is visible, and our pilot says it is about one hundred miles distance.  To-day 14 miles.”

The last journal entry finds the Herrens near the Glass Buttes not far off today’s highway 20 in desolate country:

“September 8th. – We started at 8 o’clock and traveled west about 10 miles over some of the best road that we have had since we passed the Rocky Mountains, but in the evening we had some rocky road for a few miles; here we turned about 2 degrees north of west for about 4 miles and found no grass and had to encamp in a patch of wild sage, where it was as high as our wagons.  About one mile south of where we are we found a little water, enough to cook supper with.  The stream of water that we stayed on last night runs out of the side of a mountain through a hole six feet in diameter; there is water enough within six feet of where it runs out to a drown a horse.  Passed some plains to-day that were covered.”

The party turned north, then west, and then more northerly again as they sought the Deschutes River, finally locating it near present-day Cline Falls.  Once on the Deschutes the emigrants were “found” and could follow that river down to The Dalles on the Columbia.  They were lucky to have not lost any family members during their misadventure, it is estimated that about 25 emigrants died on the route or after arrival in The Dalles.

There is another aspect of this story – while lost in central Oregon the Herren family found what later became known as the Lost Blue Bucket Gold Mine – but that tale will be told next week.

One thought on “Meek Cutoff and the Herrens”