Nathaniel Spencer Robbins, called “Uncle Nat” in my family (he was my great-grandmothers oldest brother), was born in Decatur County in 1837 and was fifteen-years-old when his family crossed the plains on the Oregon Trail.  His father William Franklin Robbins took a Donation Land Claim approximately where today’s Interstate 5 and Interstate 205 intersect, southeast of Tualatin, and not many miles west of Oregon City.  According to his obituary he lived there his entire life.  My mother remembered as a child and teenager hearing about “Uncle Nat” as though he just lived down the road.  However, by that point he’d been dead for 40-plus years.

Soon after arriving in Oregon in the late, rainy autumn of 1852, most of the family was ill.  Nat’s family was living on the west side of the Willamette River in Linn City.  When his little brother Gilman became sick and died, teenage Nat, one of the few healthy family members, was sent off to Oregon City to find his uncles Dow and Norval to come dig a grave.  Soon, however, Nat was ill along with his uncle Dow and grandfather Nathaniel and his father reported that “Nat was the lowest I ever seen anyone to recover.”  Later his sister Nancy Adeline wrote “…for two weeks he couldn’t speak above a whisper.  Just laid on a bed on the floor.  But at last he got well.” 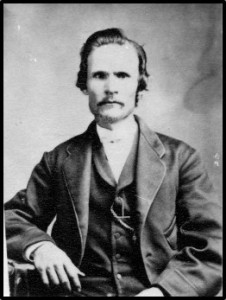 Some information about Nat’s three wives, such as all of their birth and death dates is not known.  He was first married to Sarah Evans about 1873.  She died in 1880 at approximately thirty years of age.  Together they had three children:  Clara, Hampton (“Hamp”), and Stella.  After Sarah’s death he married Martha Jane Rodgers in 1882.  No additional information is available about her except that she was the mother of Nat’s youngest son William Berry Robbins.  Thirdly, Nat married Anna Marie (Mary) Kunst, who survived him.

The 1870 agricultural schedule of the U.S. census provides a little detail of Nat’s farm in Washington County.  In the year leading up to the census enumeration he had 14 improved acres, 306 acres of woodland, two horses, three milk cows and four other cattle, and eight swine.  He produced 63 bushels of spring wheat, 108 bushels of oats, 83 bushels of barley, 50 pounds of tobacco (not the most common crop in Oregon!), 40 bushels of Irish potatoes, 7 tons of hay, and 200 lbs of butter.  That is a lot of produce for 14 improved acres of land.

According to his obituary Nat Robbins, who passed away in 1895, died of “la grippe” followed by typhoid fever, just short of his 58th birthday.  What is “la grippe?”  That’s another term for influenza.  Medical experts of the 1890s sometimes reported that it was hard to differentiate between the two diseases, and whether one really followed the other. Whatever the real diagnosis, his death saddened his family and the community.  The Portland Oregonian reported Nat “was an upright man and respected by all who knew him.”