Among our cousins was a highly respected police chief in the eastern Oregon city of The Dalles.  The subject of numerous newspaper articles about his exploits, including that of his marshal’s start stopping a bullet, Frank Heater is a family member we should know and honor.

Frank Heater was born in 1875 to Lorenzo Peter (“Pete”) and Judith Amanda (Robbins) Heater.  His mother was born shortly after the family arrived in Oregon, and after marrying Pete Heater the couple moved to eastern Oregon, settling in The Dalles along the Columbia River.

As a boy, Frank herded the neighborhood cows to grass, then back home again in the evening.  He earned 50¢ a month from each cow owner.  He worked as a cowpuncher, a sheepherder, and a “buckeroo.”  By 1910, he as operating a saloon with Frank Brown at 106 First in The Dalles.  They had sawdust floors to catch the blood and falling bodies from the fights that broke out. 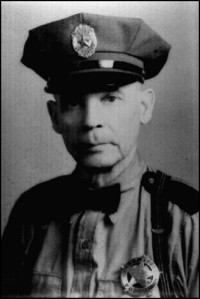 On July 1, 1918, Frank Heater joined The Dalles city police force.  The following year, after the city marshal had been killed by bank robbers, Frank assumed the position, usually referred to as “chief of police”, and held it until his retirement in 1946.  He was highly regarded in The Dalles.

One of the more spectacular episodes of The Dalles history that Frank Heater participated in was the Chinese Tong War of 1921.  The fight began when one group of Chinese heard that gunmen from Portland were coming to kidnap the leaders of their tong.

About 11 p.m., October 20, 1921, two railroad policemen stopped to interrogate one of the Chinese lookouts, who mistook the white men for the hired gunmen expected from Portland.

Reinforcements quickly came to the guard’s aid, and the railroad police, now joined by city officers, retreated along 1st street, between Court and Union, under a fusillade of fire.  About this time Heater, who had been routed out of bed, arrived on the scene.

As Heater hurried along Court street toward the railroad tracks, a Chinese with gun in hand ran out of the alley, then ducked back in, firing at Heater as the marshal gave chase, shooting the latter in the chest.  Another Oriental opened fire behind Heater and shot the officer in the left leg.  A third shadowy figure moved and Heater shot him in the hip.

By this time all hell had broken loose and slugs from Lugers, revolvers and shotguns were peppering the fronts of the old McCoy garage, Williams’ second hand store at 206 Court Street and the old Baldwin saloon.  A general alarm had been sounded on the fire bell and a large crowd of heavily armed white men appeared on the scene, but were later dispersed.

Not until cooler heads among the tong men realized the mistake being made did the firing cease.  By that time Heater, a Chinese man and Robert Saunders, then a high school senior, had all been shot and rushed to the local hospital.

It turned out that Frank Heater had been shot twice, once in the leg and once in the chest.  The bullet to the chest was stopped by his marshal’s star.

A bullet did not literally ‘lodge over his heart.’  Fired from a gun at close range the pellet struck the center of his metal star and would have gone through but for the fact its nose mushroomed and the metal of the star crumpled up around it.  The point of the bullet went through the chest wall, just entering the cavity.  Another inch now and this story wouldn’t be written today.

‘I knew I had been shot,’ Heater reminisced recently at police headquarters.  ‘From the way the bullet walloped me I thought it was pretty bad and that I was done for.  I don’t know when I was shot in the leg.  I never felt that at all until later.  There was too much excitement and shooting going on to notice it when it happened.

Heater’s granddaughter, in a biography for the Oregon State Archives, states that the damaged marshal’s star was given to The Dalles Police Department in 1966 by her mother, Charlotte (Heater) Proudfoot.

Another newspaper story, this one from 1933, reported “A bullet wound in his right hand, Fred Jackson, transient, was taken to The Dalles hospital this morning after attempting to flee from Police Chief Frank Heater on a downtown street.  Heater shot Jackson when the latter failed to heed the officers warning to stop, after the itinerant had been discovered in possession of stolen property.”

The following year when First Lady Eleanor Roosevelt motored by car (by her own hand) through The Dalles, Chief Heater offered her an escort through the city, which Mrs. Roosevelt refused.

In an undated news article entitled “Jest-a-Minute” by “K.W.” the author writes:

“And why don’t we tell people oftener how much we think of them, and how much they have meant in our lives?  I think today, I’ll throw a bouquet, in the direction of…

…Frank Heater—The best gosh darned chief of police this community ever had, who maintained law and order when everyone else thought The Dalles had to be part of the accent on the WILD West, and who still bears bullet scars to prove that he was afraid of nothing.  Maybe he did always call me “Benny,” which never was my name.  I always felt my family was safe, in the old days, with him on the job.