“This coverlid was wove on a hand loom in Virginia before 1836 for the hope chest of Miss Melvina Meyers who later became Mrs William Robbins,was brought to Oregon by Mrs Robbins in 1852, later became the property of Mrs Nancy A Ball.  It is now owned by Mrs. A McConnell.”

This is a hand-written note made by Ada (Ball) McConnell (the subject of last weeks’ post), that accompanied the “coverlid” or coverlet down to the present day.  The original note, along with half of the coverlet, is now in the custody of the Tualatin Historical Society.  The other half of the coverlet is in the possession of cousin Barbara Stinger, for whom I thank for this story and the photos of the textile.

Let’s back up a bit.  Melvina Myers was a daughter of George and Margaret (Moore) Myers and born in Kentucky in 1818.  The Myers family moved to Decatur County, Indiana, where Melvina met and married William Franklin Robbins in 1836.  Her sister Catherine was married to William’s cousin Jacob F. Robbins.

The note accompanying the coverlet states it was “wove” in Virginia.  Melvina didn’t live in Virginia, so it could be that the writer did not know exactly where she was when she received the coverlet.  It’s probably more likely it was created in Kentucky or Indiana.  The hope chest, also called a dowry chest, was traditionally used by young unmarried women to collect items such as clothes and household linen in anticipation of married life. 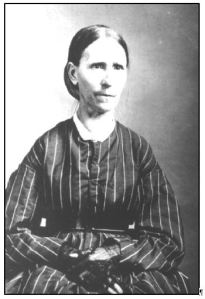 After her marriage in 1836, Melvina and William had seven children born in Indiana, one born in Missouri when they wintered over before leaving for Oregon, and one after their arrival in Oregon (my great-mother).  After William’s death by accidental shooting in 1856, Melvina married again, to Robert Lavery, had one more child, and then after her death seems to have returned to the Robbins fold, being buried in the family’s cemetery under the name Melvina M. Robbins.

Cousin Barbara adds that the coverlet measures 35 inches wide by 75-1/2 inches long, and that there were two pieces sewed together.  What a treasure!

One thought on “A Very Rare Artifact”