William Franklin Robbins, not to be confused with another of the same name (the family historian in Decatur County who read his noted history at the 1922 Robbins reunion), was the eldest surviving child of Nathaniel and Nancy Robbins and an Oregon Trail emigrant of 1852.

No photographs were ever taken of William and for the longest time his personality and thoughts were hidden to us, with only his name, dates, and tragic death being passed down through family.  In 1999 while searching through Greensburg newspapers looking for any mention of my family’s trek to Oregon, I came across a letter written by William describing in detail the events of that trip.  Titled “Journey to Oregon,” the letter appeared on the front-page of two issues of the The Decatur Press in 1853.  Suddenly, I had an impression of a man who for so long seemed to hide in the shadow of his parents and much longer lived siblings.

William Franklin Robbins was born in Henry County, Kentucky, to Nathaniel and Nancy Robbins.  Nathaniel and Nancy were cousins – Nathaniel’s father William was the brother of Nancy’s father Absalom.  After a few short years in Bond County, Illinois, the family came back east and settled in Decatur County where they lived until the fall of 1851.

William was married in 1836 to Melvina Myers, a woman whose sad photo does survive, the daughter of George and Margaret Myers of Decatur County.  The Myers had a large family, and one of George’s descendants was Dale Myers, long-time historian of Decatur County and a good friend.

Not found in the 1850 Decatur County census, it is possible that William was already en route to Missouri with his family, where he was going to rent a place to winter over before moving to Oregon.  In the fall of 1851, Nathaniel and Nancy and all their children, in-laws, and grandchildren, arrived in Missouri and stayed at the son’s rented farm.

While not a day by day journal of the trip, it is a very complete account, and William describes in detail the events, not to mention the daily health issues, of the members of the family.  The biggest event, of course, was the death of three of his sisters from cholera in Nebraska, and I’ll post more excerpts from William’s letter in later articles about this tragic event but today I’ll just describe William’s heartbreaking description of the death of his 11-year-old son Gilman once the party arrived in Oregon in November.

“Gilman was able to walk out of doors without help, which he had not been able to do for some time, and he appeared to be a little better until Thursday morning, when he was taken with a severe diarrhoea, and he being very weak with the fever it soon ran him down, and Friday morning about breakfast time he died.  This was the hardest stroke that ever fell on me, he was such a good boy in our train; he received several presents as a reward for his good behavior and attention to business.  When I found he was dying I ran for some of the neighbors to come in, I went first to old Mr. Moors, Mrs. Moor went back with me, and the old man went for others, in a few minutes Mrs. Divas came; Mrs. Moor closed his eyes, when she came to me and asked me if we had any clothes to put on him, I told her that we had none but what was dirty and ragged, and nobody able to wash any, she told me to cheer up and she would be my friend.  She went home and brought clothes clean, washed and ironed, that fitted him, then her and Mrs. Divas laid him out.  She gave me money and told me to go to Mr. Barnes and get a coffin, and Nat went to Willamette city to get his uncle Dow and Norvil to dig a grave as there was no chance to get help here.  Dow and Norvil came back with Nat, all as wet as they could be.  It was as hard a days rain as I have seen in Oregon; it rained so hard, and was so late in the day that there was no chance to get a grave dug that day; the days being very short, much shorter then they ever get in Indiana.  This was the 17th day of November; next day they dug a grave and buried him on a bench in the bluff above Lynn city, in a beautiful spot that had been selected by the citizens of Lynn city as a graveyard; there had been two or three buried there before.” [note: no cemetery has survived and Gilman’s grave is now lost].

Once in Oregon, the job of building a new life began.  William joined his family members in taking out a Donation Land Claim west of the Willamette River in the current area of Wilsonville and Tualatin.  But a long life was not to be for this intrepid traveler.  In 1856, in one more tragedy for this family less than four years after arrival in Oregon, William lost his life in a hunting accident.  His daughter Melissa wrote years later of that event and William’s funeral:

“But how soon happiness can be turned to sorrow for when I was but four years old Father was taken from us by death in the accidental discharge of his gun while trailing a Bear in company with his Brothers, tho so young I could always remember seeing his body carried from the forest and of being lifted up to view him for the last time as he lay in his casket.  There being no horse teams in our community except Grandfathers [Nathaniel Robbins] which  hitched to a wagon in which was placed the casket and in which Mother [Melvina], baby sister [Artemissa] and I also rode with the rest of the crowd walking we proceeded to the Cemetery one half mile distant and there without a Minister of God to offer a last prayer or to speak one word of comfort to the grief stricken ones his body was laid to rest and while I was too young to realize my loss yet Mother’s heart broken sobbings at that time has followed me through life.” 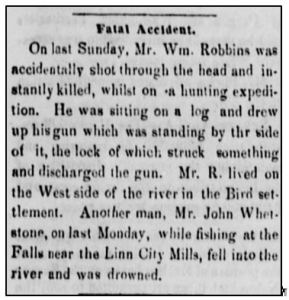 William Franklin Robbins may have died before his time, but his legacy lives on in one of the largest groups of descendants of Nathaniel and Nancy Robbins.