One of the busiest and most used transportation corridors in American history was (and still is) that of the Mississippi river valley.  Steamboats traveled the Mississippi river and its tributaries from the early 1800s up to the 20th century.  One of our kin, William Robbins of Hannibal, Missouri, was a steamboat pilot and captain on the Mississippi River, traveling between Keokuk, Iowa in the north and New Orleans in the far south.  His adventures in and around Hannibal recall the life stories of his near contemporary Mark Twain and that authors creations, Tom Sawyer and Huckleberry Finn.

Born in Kentucky in 1828, he, his parents, and his siblings moved to Decatur Co., Indiana, where they only spent a few years in the 1830’s before moving on to Marion Co., Missouri, where William was raised to adulthood.  When his father moved to Davis Co., Iowa, in the early 1850’s, William stayed behind, as he was already married and running a farm.  Within a few years he had begun piloting and then captaining the famous sidewheel steamboats.

There was danger in traveling the river: running aground, hitting snags, collisions, and scariest of all, fire!  William Robbins recounted in newspapers and reminiscences several instances of disaster on the river. 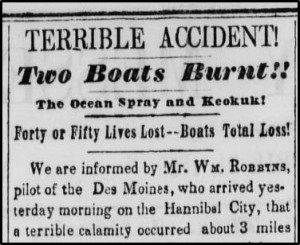 We are informed by Mr. WM. ROBBINS, pilot of the Des Moines, who arrived yesterday morning on the Hannibal City, that a terrible calamity occurred about 3 miles above St. Louis, the particulars of which we give below:  It seems that the steamers Hannibal City and Ocean Spray were running a race, both boats at the top of their speed, when suddenly it was discovered that the Ocean Spray was on fire, about midships on the lower deck.  The Pilot, with great presence of mind, turned the head of the boat towards shore and stood firm at his post until the boat was run ashore.—The pilot and his wife, with several others, jumped from the hurricane deck to the shore and escaped without material injury.  When this boat was first ascertained to be on fire, many of the passengers jumped over board and found a watery grave, many were burned to death, and we are informed by those who witnessed the appalling scene, that it was truly awful.

The shrieks of men, women and children, were heard above the din of the roaring elements, and though they could render no assistance at that time, still all on board the Hannibal City were anxious to do all in their power to alleviate the sufferings of the unfortunate passengers of the Ocean Spray.  There was a heavy wind blowing at the time, and had the Hannibal City attempted to have approached her, except with the greatest of caution, she must inevitably been burned too.

The steamer Keokuk, which was laid up immediately opposite the scene of action, was also set fire by the Ocean Spray in making her land, and was burnt to the waters edge.  The hulls of both boats, then floated down to the Island opposite St. Louis, when the ferry boat run out into the river, caught them and towed them to shore.

We are told that the entire blame of the whole affair rests on the officers of the Ocean Spray, as they had been for some time bantering the Hannibal City to a race, and thus it ends!

Another time Robbins remembered when he was taking a trip on a river boat as a passenger:

“After he retired from the River, in 1877, he took a trip on the Golden Eagle with his friend Captain Dave Asbury from Canton, Missouri, who had also become a pilot in 1853.  Captain Asbury was in charge of the Golden Eagle at the time of this happening.  On that particular down-river trip to St. Louis, the Golden Eagle was completely destroyed by fire.  Robbins was en route to St. Louis on a business trip, and was carrying a large sum of cash in his wallet.  He was also taking a calf to market.

He was sound asleep when the cry, “Fire! Fire!” awakened him.  He hurriedly jumped up and pulled on his trousers and ran out of his stateroom and found his calf on the lower deck.  Half asleep, he had not yet realized the seriousness of the fire.  Stumbling through the darkness leading the calf, they both fell down the forward hatchway into the hold.  But they finally made their way to safety.

Captain Asbury had ordered the boat to pull to shore.  Luckily, they were close enough to the shore, all the passengers were rescued before the boat was complete destroyed.  Robbins saw other Hannibal people of his acquaintance, one of whom was Mr. Spencer Carter, a mill owner and banker. Robbins helped Mr. Carter and his daughter to shore.

Suddenly, Robbins remembered he had neglected to retrieve his wallet from under his pillow where he had hidden it.  In the old steamboat days, when men bunked down they hung their trousers at the foot of the berth.  Robbery was so common that valuables were never left in the pants pockets as thieves would naturally look in the pockets.  It was too late to go back to the boat, so he lost a large sum of money.”

(“A Steamboat Fire and Miller Township Man,” in Withers Mill—Miller Township: A Collection of Stories about a Neighborhood (1989) by J. Hurley Hagood and Roberta Roland Hagood.) 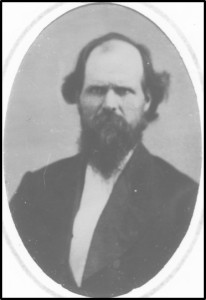 At least through his almost twenty years of piloting and captaining river boats, and the rest of his lifetime of traveling on them, William Robbins only lost his wallet and not his life!  He was found dead of a heart attack in his farm’s pasture in 1904 and is buried in the Bear Creek Cemetery in the countryside outside of Hannibal.